Easy Way to Build Communication with Toys You Already Own 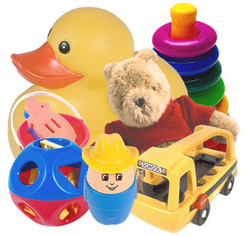 An effective way to increase many language and social skills, while putting a new spin on an old game or toy, are barrier games.  In a barrier game, the players sit with some sort of barrier between them and a directing player gives directions on how to complete a task or create a matching end product.  Common toys, such as Mr. Potato Head, Cootie bugs from the game Cooties, Legos, K’nex, a coloring page, or simply a piece of paper and some crayons can be used.  To play a barrier game, the “it” person, or the directing player, creates a product.  For building games, it could be a structure using particular types of blocks or certain colors.  For Mr. Potato Head one player could draw a diagram of the final product that the other player is going to have to create.  Then, without being able to see what the other is doing, and just using words, the “it” player describes what the other player needs to do to accomplish the final product.  This requires the use of precise language, including adjectives and prepositions. This spin on your typical toys targets skills such as receptive language, use of descriptive language, and perspective taking skills.  The “it” player will learn quickly that simply saying “put the piece on the side” is not sufficient enough to “win” the game.  Try it out yourself with a sibling or friend first to see how much fun it can be.  Even the attempts that don't work out can be as much fun as those that do!
0 Comments